Apps created with Calcapp are typically used to perform numeric calculations, but you can also process text. We support most of the text-processing formula functions spreadsheets offer. These are the most frequently-used text functions (there’s more information in the reference sidebar):

While these functions are quite versatile, there are many things they cannot easily do, including:

Three new text-processing functions enable this and more. What they have in common is that they expect you to write so-called regular expressions.

A regular expression is a specially-crafted text string which can be used to find text strings within other text strings. They are very powerful, but can also be difficult to understand. There are entire books devoted to the topic (including the Calcapp team’s favorite book on the subject) and numerous online tutorials (here’s one we like to use). In this post, we’ll provide a basic introduction, but you’ll have to consult other sources to truly master regular expressions.

We have modeled our three new functions after the Google Sheets functions, but our functions offer features that go beyond Google’s offering. The new functionality is offered through optional parameters to the Calcapp functions, meaning that you should be able to copy and paste formulas which use REGEXMATCH, REGEXEXTRACT and REGEXREPLACE directly from Google Sheets and have them work correctly in apps you build with Calcapp.

Regular expressions are part of lots of products and they often use dialects which aren’t quite compatible with one another. Google Sheets uses a dialect called RE2 and Calcapp uses the JavaScript dialect (with certain additions).

Does “bc” appear within “Abc”? The following formula returns TRUE to indicate that it does: REGEXMATCH("Abc", "bc").

Of course, you can determine the same thing with the FIND function. The true value in regular expressions is their support for special characters, which can match not just literal characters but entire classes of characters, such as all letters, all numbers or even all vowels, and more.

Matching a letter and whitespace

There is also the special character \w, which is equivalent to [a-zA-Z0-9_] and thus matches any letter, digit or underscore. \s matches any whitespace character, which is an invisible character such as an actual space or a tab character.

Parentheses can also be used to specify alternation in a regular expression in conjunction with the special character, |. Alternation here means “either or,” in the sense “match this text string or match that other text string.”

[^\d]+\d is mostly equivalent to .+\d (“match at least one character which is not a number, followed by a single number”). Generally speaking, it runs faster, so we suggest that you try to use a negated character group instead of a period whenever possible.

The ^ and $ characters are anchors which allow you to anchor your regular expression to the beginning of the text string or to the end of it. REGEXMATCH("test0test", "\d") actually returns TRUE, because there is a single number in the text string (“test” is ignored). REGEXMATCH("test0test", "^\d$"), on the other hand, returns FALSE, as the number in the regular expression is anchored both to the beginning of the text string and to the end of it, meaning that the “test” parts make the test fail.

Finally, if you need to match literal text that is in conflict with the special characters supported by regular expressions, you need to escape that text by placing backslashes before the problematic characters. REGEXMATCH("\d", "\d") returns FALSE, as “\d” isn’t a number, but REGEXMATCH("\d", "\\d") returns TRUE, because the extra backslash tells Calcapp that you want to match a literal backslash followed by “d”.

Google Sheet’s version of REGEXMATCH also accepts two parameters and, with few exceptions, work exactly like Calcapp’s version. Calcapp accepts an additional two parameters, both of which are optional. If you care about bringing Calcapp formulas over to Google Sheets, you may want to ignore the extra parameters.

Before demonstrating this fourth parameter, let’s briefly discuss what a line in a text string really is. When you press Enter on your keyboard to get a new line, what you’re doing is that you’re entering a special character, a line break character. When your computer sees the line break character, it knows that the text that follows should be presented on a new line. In Calcapp, you can produce a newline character using the CHAR formula function with the parameter 10, meaning that the formula "Line 1" & CHAR(10) & "Line 2" produces this text string:

Calcapp discovers errors in regular expressions only when you run your app. When it encounters an invalid regular expression, it returns an error value which displays as #VALUE!. If you hover your mouse cursor over #VALUE!, the message Invalid value error in the function “REGEXMATCH” appears, followed by a helpful error message.

Here’s a test app we wrote to ensure that all the formulas above are correct. We deliberately made a mistake and wrote REGEXMATCH("test0test", "(^\d$") (with an unclosed parenthesis). As you can see, the error message “unterminated group” is displayed when you hover your mouse cursor over the #VALUE! error: 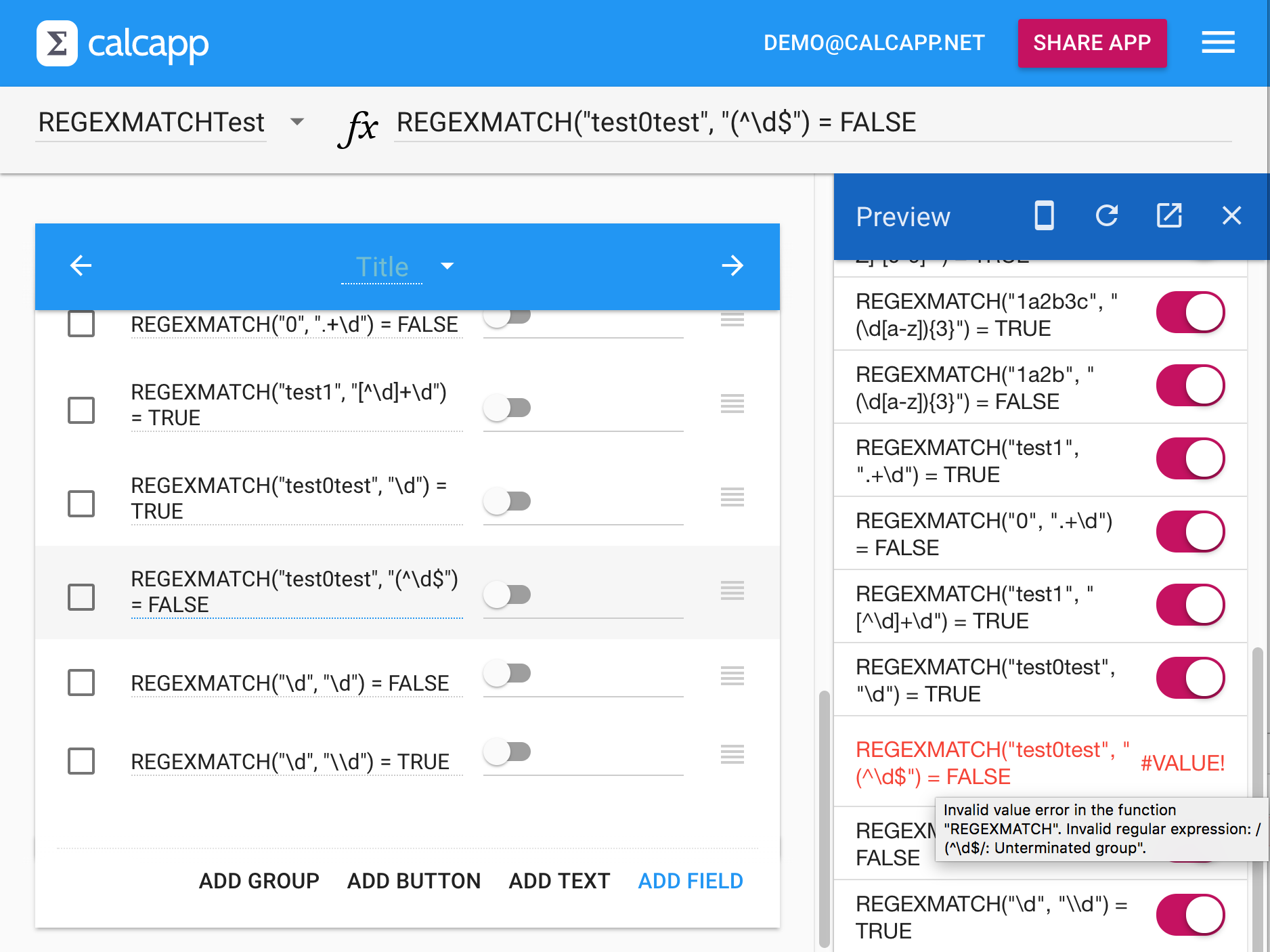 Enclosing part of a regular expression in parentheses makes that part a capturing group (which enables you to extract the characters that are part of the group, as discussed below). If a group is “unterminated,” it means that it’s missing its closing parenthesis.

Important: Errors, such as #VALUE! are only shown when your app is run in the preview sidebar or through connect.calcapp.net. Shared apps never display errors.

Use the REGEXEXTRACT function to extract text using regular expressions. REGEXEXTRACT("This is a test", "\b\w{2}\b") returns “is”, because that is the only whole word with exactly two characters.

Aside from the two required parameters, which are also supported by Google Sheets, Calcapp also supports three additional, Calcapp-specific parameters. We’ll return to the third parameter, but the fourth parameter makes matching case-insensitive when set to TRUE (see above) and the fifth parameter, when set to TRUE, makes the ^ and $ anchors line-relative as opposed to relative to the entire text string (again, see above).

The third parameter should be set to a number, which specifies what capturing group should be returned. A capturing group enables you to extract very specific parts of a text string and is added to your regular expressions by enclosing these parts in parentheses. If the third parameter is not specified (or is set to BLANK()), the entire text string that matched is returned.

Consider REGEXEXTRACT("The 99th combination is 204228", "(\d+)[^\d]*(\d+)"). Here’s what the regular expression means: “Match one or several numbers and capture them, then match any number of characters which are not numbers and finally, match and capture one or several numbers.” As it is invoked without the third parameter, this function returns the entire text string that matches, that is, “99th combination is 204228.”

Enclosing text in parentheses in a regular expression is useful not just when you need to extract certain information. As we saw earlier, (\d[a-z]){3} uses parentheses to match a number followed by a letter, but only if that combination is repeated three times. If you need to use parentheses with REGEXEXTRACT for that purpose and not as a means of extracting certain information, you can write (?: instead of ( to ensure that you’re not starting a capturing group.

The third and final new text-processing function is REGEXREPLACE, which replaces text using regular expressions: REGEXREPLACE("Abc", "Ab", "De") returns “Dec”, just like the SUBSTITUTE example used at the beginning of this post.

The fourth parameter may be set to TRUE if all matches and not just the first one should be replaced. As such, REGEXREPLACE("The 24th of May, 2019", "\d+", "", TRUE) returns “The th of May, “, effectively removing both numbers.

You can use capturing groups with REGEXREPLACE, just like with REGEXEXTRACT. The replacement text, given as the third parameter, can refer back to these capturing groups by writing a dollar sign ($) followed by the number of the capturing group. REGEXREPLACE("This is a sentence", "(\w+)\s+(\w+)\s+(\w+)\s+(\w+)", "$4 $3 $2 $1") returns “sentence a is This”, reversing the order of the words. The regular expression captures four words (the special character \w, which repeats one or many times), surrounded by spaces (the special character \s, which repeats one or many times).

There are a few things related to the regular expression that are worth discussing. First, (-?\d+(?:\.\d+)?) is used to match and capture a number. The presence of -? enables the number to be negative, with an optional minus symbol appearing before the rest of the number. \d+ requires the number to have at least one integer digit. (?:\.\d+)? captures the fractional part of the number (the “.19” in “-3.19”) and uses a non-capturing group starting with (?: as described above. In order to match a literal period, it has to be escaped, meaning that it is written \., otherwise the period would match any character. \d+ matches the actual fractional numbers. Finally, the group ends with ?, meaning that numbers don’t have to have fractional parts in order to match.

Matching letters not in English

As we have seen, [a-zA-Z] can be used to match letters in English. Unfortunately, this only works for the 26 letters of the English alphabet. \w won’t work either, as it’s simply a concise way of writing [a-zA-Z0-9_].

\p enables characters to be chosen from various categories, where letters are just one category of many. Another useful category is made up of currency symbols like “$”, “€” and “¥”. Match currency symbols using the “Sc” category, meaning that REGEXEXTRACT("$42", "\p{Sc}+") returns “$”.

« Feature: The CHOOSE function, an alternative to IF Feature: Color themes and app-wide colors »