Are we there yet?

We're hard at work polishing our new formula documentation and getting our new release ready. Action formulas have been pushed to our next release.

Judging by the paucity of blog posts lately, you’d be forgiven for thinking that we’re off on some beach somewhere, sipping margaritas, while essentially letting Calcapp take care of itself.

That’s not true, though. We’ve spent many years working full-time on Calcapp, and this year is no exception. With this blog post, we hereby assert that we are very much alive and that your precious subscription dollars (or euros, kronor, or what have you) are being used to dramatically improve Calcapp, and to lay the foundation for an even better future product.

We have mostly spent our time on the new formula engine we have teased since last year (in March, January and late last year). Calcapp will almost reach parity with the latest version of Microsoft Excel (including its new lifting behavior and functions like XLOOKUP, FILTER and SORT), and will add well-thought-out Calcapp extensions.

Making a case for improving our formula documentation

We first envisioned Calcapp as an app builder for people well-versed in Microsoft Excel and other spreadsheets. As such, the original function documentation was concise to the point of being terse. For a quick refresher on the order of parameters to the PMT financial function, it worked nicely, but if you had no idea how to use this function, our documentation proved inadequate.

It’s been five and a half years since our beta launched, and we’ve learned a great deal since then. One of the things we’ve learned is that while some of our customers indeed are Excel experts, many of you are not. That makes it doubly important that we have formula documentation that can stand on its own, with no prior knowledge of Excel necessary.

Our new formula engine comes with a lot of new formula functions. Like many of our existing functions, they are compatible with Microsoft Excel. What’s different, though, is that these functions are often relatively new, meaning that many of our customers can be expected to be significantly less familiar with them than with functions that hail from the 1980s. (You may be able to write SUMIF formulas in your sleep, but can you say the same for XMATCH?)

We take compatibility with Excel seriously, but at the same time, an app builder isn’t a spreadsheet, and that must be reflected in its function library. Also, we think that there is room for improvement in the set of functions offered by spreadsheets. Our new formula engine offers lots of extensions, with the end goal being that formulas are easier to write, read and maintain, offer clearer error messages and require fewer arcane workarounds.

(For instance, Excel power users typically use the double negative construct with functions like SUMPRODUCT. Calcapp’s new SUMPRODUCT function will work with or without this construct. Also, Excel’s new FILTER function requires you to awkwardly use the + and * operators to express “logical or” and “logical and.” Calcapp will support these operators, but also its own || and && operators.)

A sneak peek at our new formula documentation

For all the reasons outlined above, we’re investing heavily in our formula documentation. We shared a preview of our documentation for FILTER back in March, and since then, a lot of improvements have been made:

Here’s a screenshot of the documentation for FILTER: 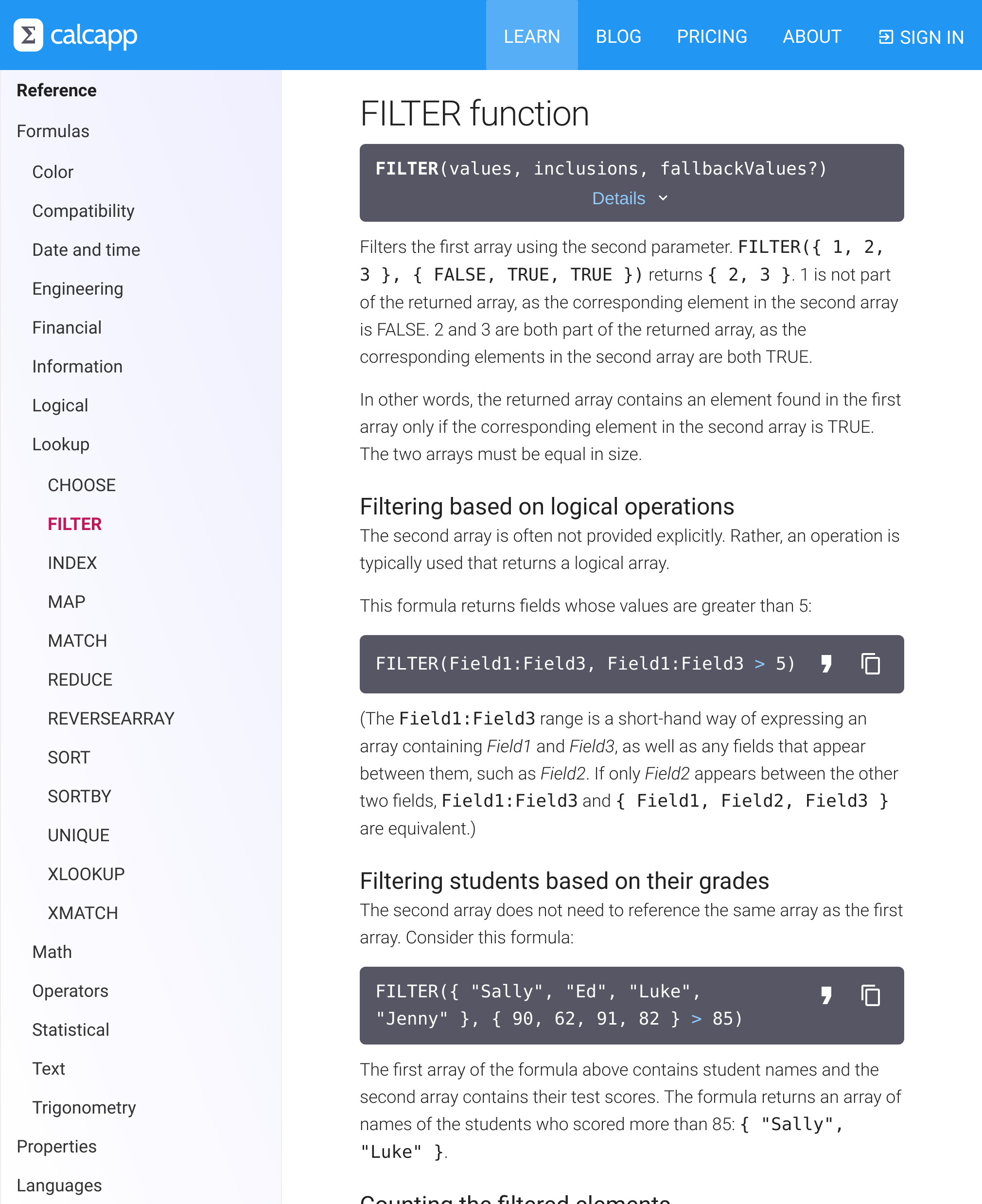 When we completed revamping our function and operator documentation, we realized that we wanted our property documentation to be equally good. (What’s a property? Fields have lots of them, and they represent things like the value of the field, whether it is visible and its color. What sets Calcapp apart is that these properties can be defined through formulas, making for truly dynamic user interfaces adapting to the actions of your users.)

That’s where we are today, moving our existing property documentation to our main website, and expanding it in the process with lots of new formula examples. We expect this process to be faster than writing and copy-editing the function and operator documentation.

Earlier posts have discussed our new support for action formulas. In order to get our new release out the door sooner, we have decided to push this important feature to the next release. All the groundwork for action formulas has already been laid, we just need some extra time to really make this feature shine.

We had wanted to release our new version before the summer holidays. We could probably still make it, but we think it would be ill-advised. We prize stability over everything else, to ensure that your apps continue working, no matter what. We don’t want to jeopardize stability by pushing out an ambitious new release when the core team is on a much-needed break.

Look for our new release in the coming months.

« Decimal commas in formulas and better documentation are coming soon