Reports can now be opened directly from an app, instead of having them e-mailed. Use the new feature on its own, or use it as a preview feature your users can use to check reports before sending them.

A year ago, we announced that we had added the ability to e-mail reports from apps. Using that feature, you can add a button to your app that sends a report to an e-mail address you specify. You can also use a formula to determine the recipients, meaning that reports can be sent to an e-mail address specified by a user of your app.

Sometimes you don’t want the hassle of entering your e-mail address in an app and checking your inbox just to get access to a report. To that end, you can now add buttons to your apps that open reports directly.

Buttons by default reset fields to their initial values. Change the action by selecting Action: Open report from the drop-down menu in the left-hand inspector.

When you e-mail reports, you can send them as text, comma-separated values (CSV) or as PDF files. When you enable reports to be opened directly, you can select between the same formats, with one difference. Instead of allowing you to simply send reports as “text,” you now have to specify whether the report should be sent as plain text or as a web page (HTML): 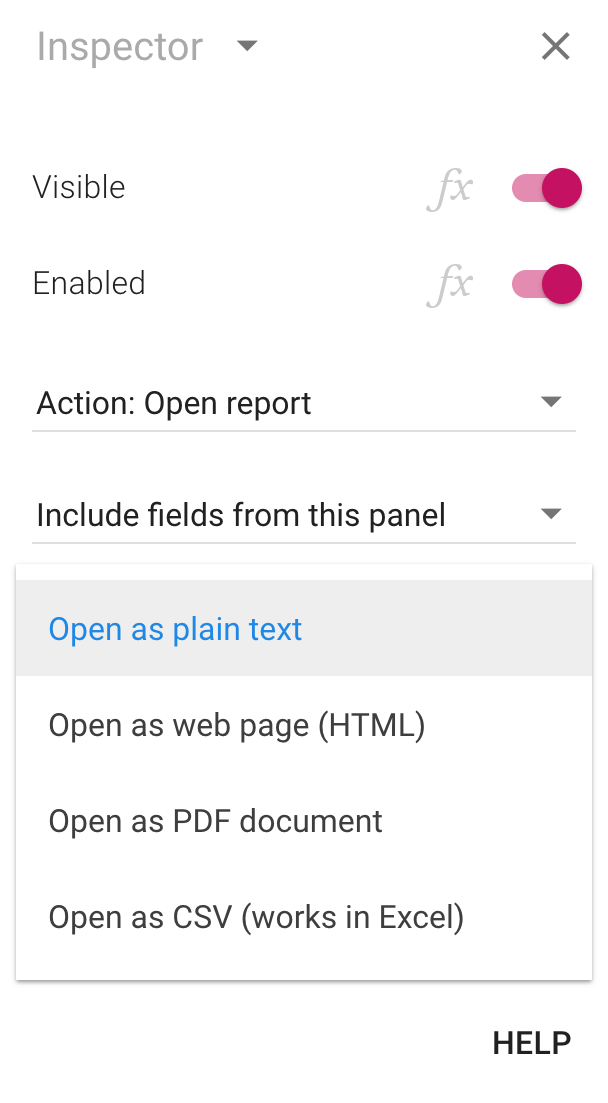 When you send a text report through e-mail, both a plain text version and an HTML version are sent. Your e-mail app automatically selects the most appropriate version to display. (For a modern e-mail app, that is typically the HTML version, which contains neatly formatted tables.) When a report is opened directly, you need to decide upfront whether a plain text version should be sent or a web page.

Technically, this feature works by contacting the Calcapp server and asking it to create a report, which your device then downloads. As a result, this feature does not work when your users are offline. (All features other than e-mailing and opening reports work offline.)