Our next release has been delayed

Our next release has been slightly delayed, because we are adding new features to it. Two of those features are announced in this post, including a better formula editing experience and an easy way to check multiple items in Calcapp Creator.

In September, we announced a slew of new features for our upcoming release and noted that we expected to release it “in the coming months.”

However, in close consultation with our customers, we have decided to incorporate a fair number of additional features into our next release. The good news is that it will be our biggest release ever, with many new features that enable new types of apps to be built, along with a host of improvements to the app authoring experience. The bad news is that you will need to wait a while longer before you get access to it.

In addition to the features we previously teased, these new features are also slated to be part of our next release:

In November last year, we dramatically improved our formula documentation. It contains thousands of formula examples, which you can copy and paste into the formula field in Calcapp Creator.

Currently, the documentation is a part of our main website, and you can’t gain access to it from inside of the app designer. Moreover, when you type formulas, there is no help or guidance to be had. While we’ve worked hard to make the error messages presented to you as clear as possible, there is no help to be had while typing formulas in Calcapp Creator itself.

Spreadsheets were much the same way in years past, but have recently become more helpful. (Microsoft calls their implementation in Excel AutoComplete and Google Sheets offers a similar feature.) You get helpful suggestions when typing formulas, and snippets of documentation appear when you supply functions with their parameters. Crucially, you are provided with the name of the current function parameter, meaning that memorizing the parameter order is a thing of the past.

Calcapp will gain a similar feature set in our next release. When you type, a box will appear allowing you to easily insert function names, parameter names, field names and more: 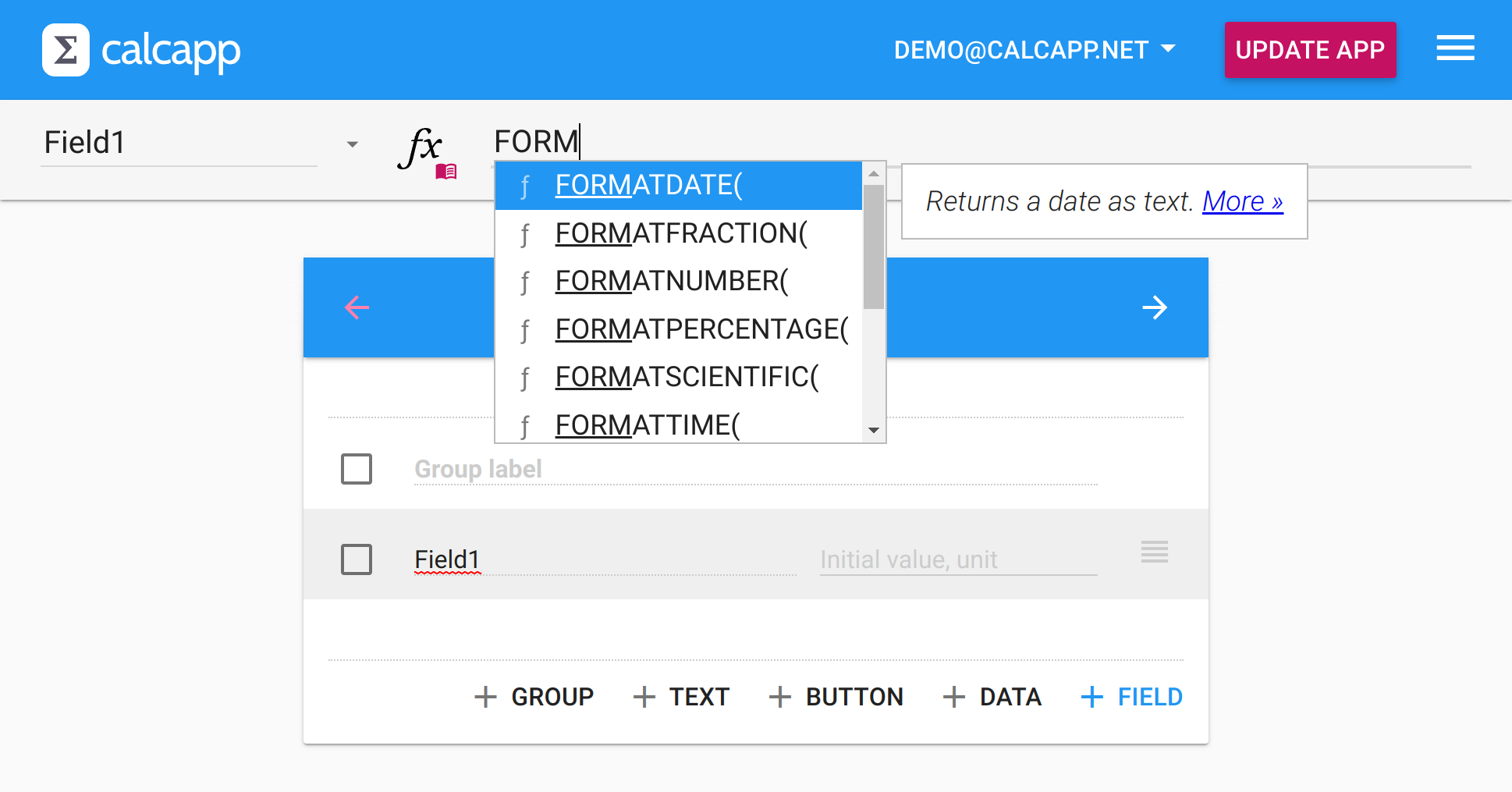 If you type the name of a screen (or select it from the box) followed by !, you’ll be given the opportunity to select which of its fields to reference: 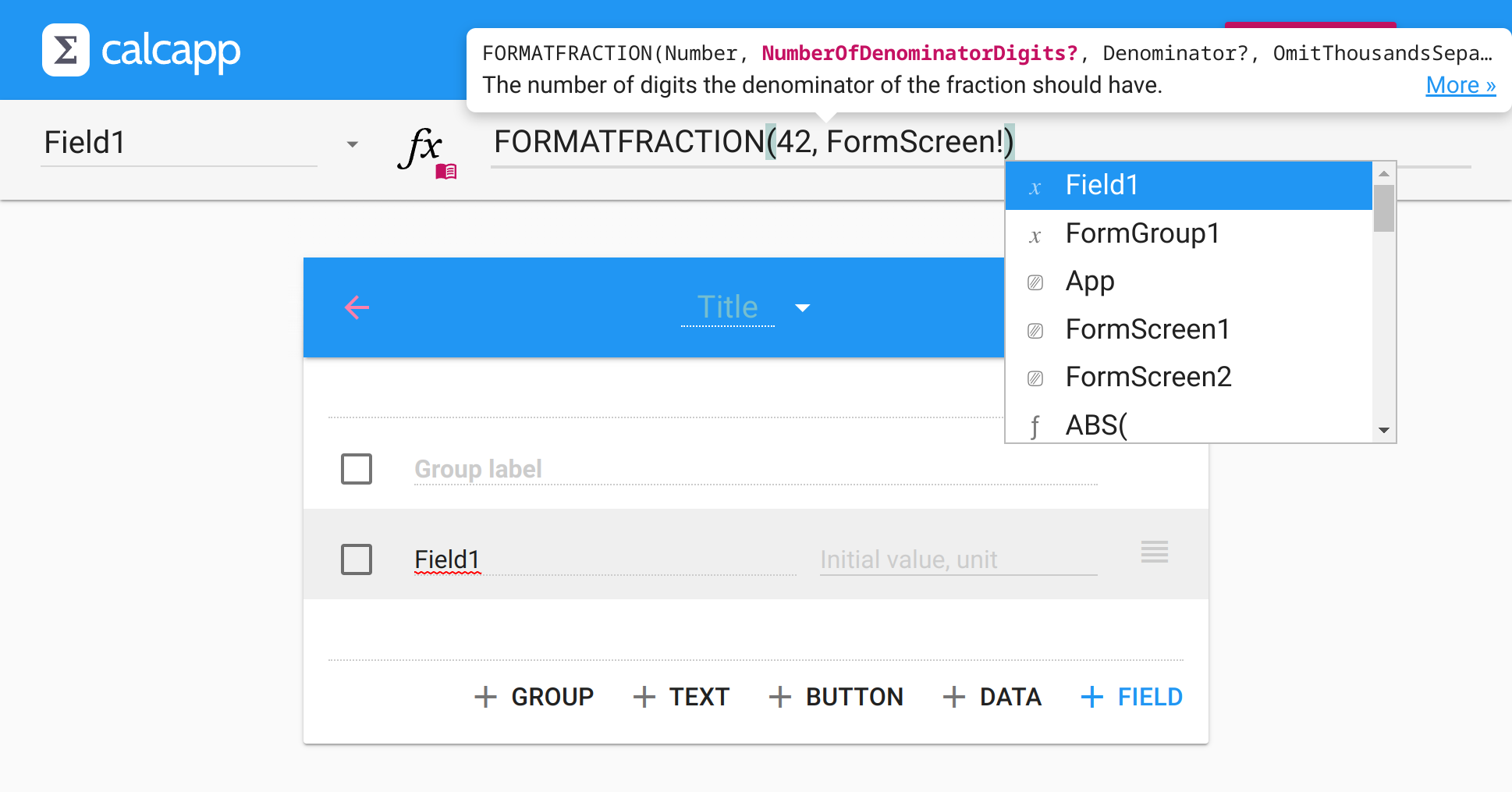 If you type the name of a screen, a field or another item, followed by .,, you get to select a property to reference: 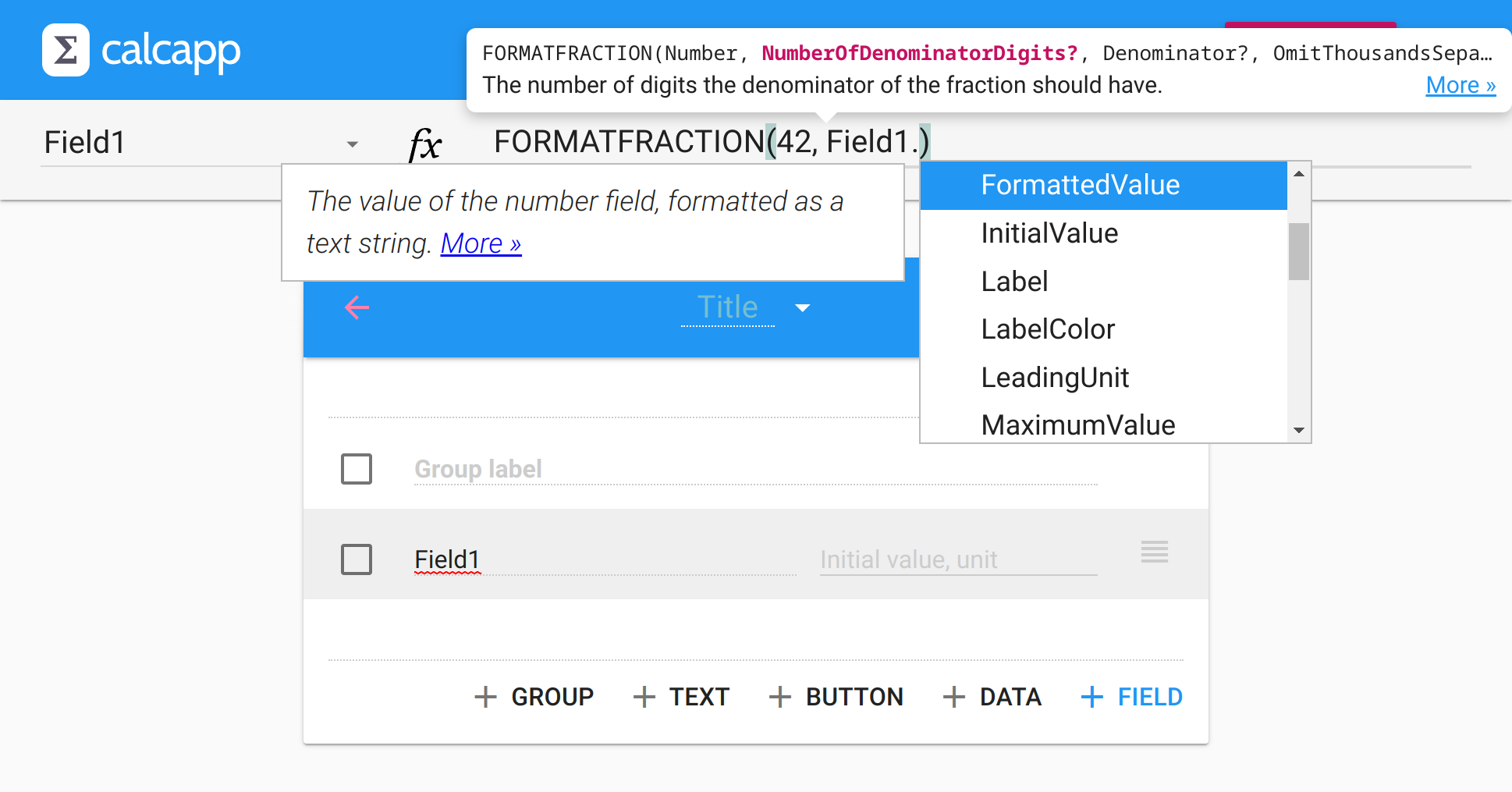 Finally, if you edit a parameter to a function, a popup appears showing exactly which parameter you’re editing, along with a snippet from the documentation and a link to the full text: 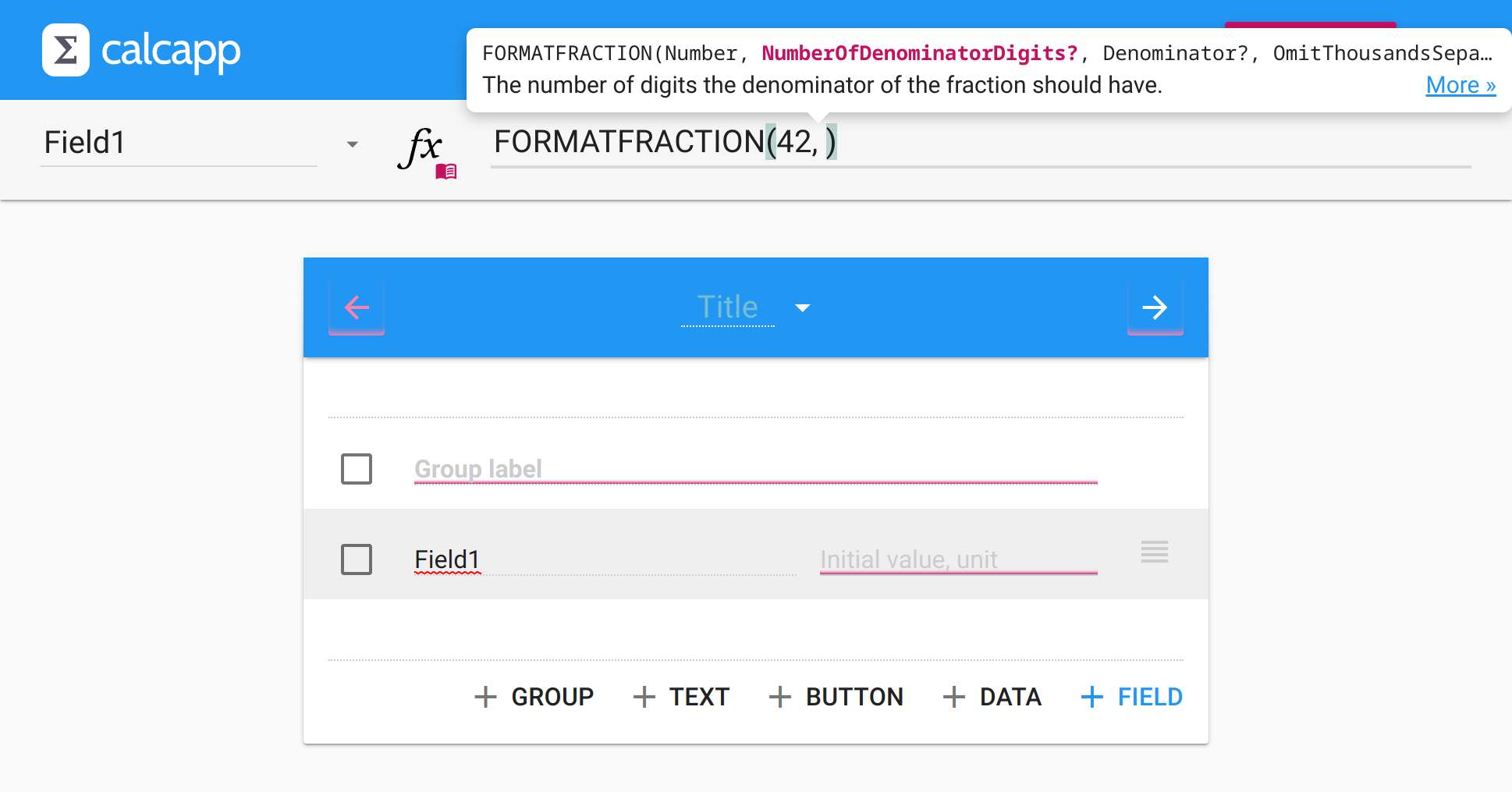 The formula editing experience has been upgraded in other ways as well, including bracket matching (when the cursor is by a parenthesis or an array brace, the corresponding parenthesis or array brace “on the other side” is highlighted), the ability to insert line breaks and more.

When you’re creating an app, checking multiple fields or other items is often the best way to quickly make changes. You can remove multiple items at once, and edit properties of multiple items at once. For instance, if you check ten number fields, you can make them all enabled or disabled, without having to make these changes individually.

In form screens, fields, buttons and text boxes are part of form groups. When you check a form group, all its constituent items are also checked, and vice versa when you uncheck the form group. We envisioned this as a way to quickly check multiple items.

However, sometimes you need to quickly check multiple items, that just happen to be adjacent, and are not necessarily part of the same form group. Also, sometimes you want to check a form group, without checking its constituent items. (If you remove just a form group and not its items, for instance, its items are merged into the form group above it.)

The standard way of enabling multiple adjacent items to be checked is to press and hold the Shift key while checking items, and this is exactly the workflow that Calcapp Creator will soon support. As some of our Calcapp Creator users are on touch devices, there will also be a button you can toggle to access the new feature: 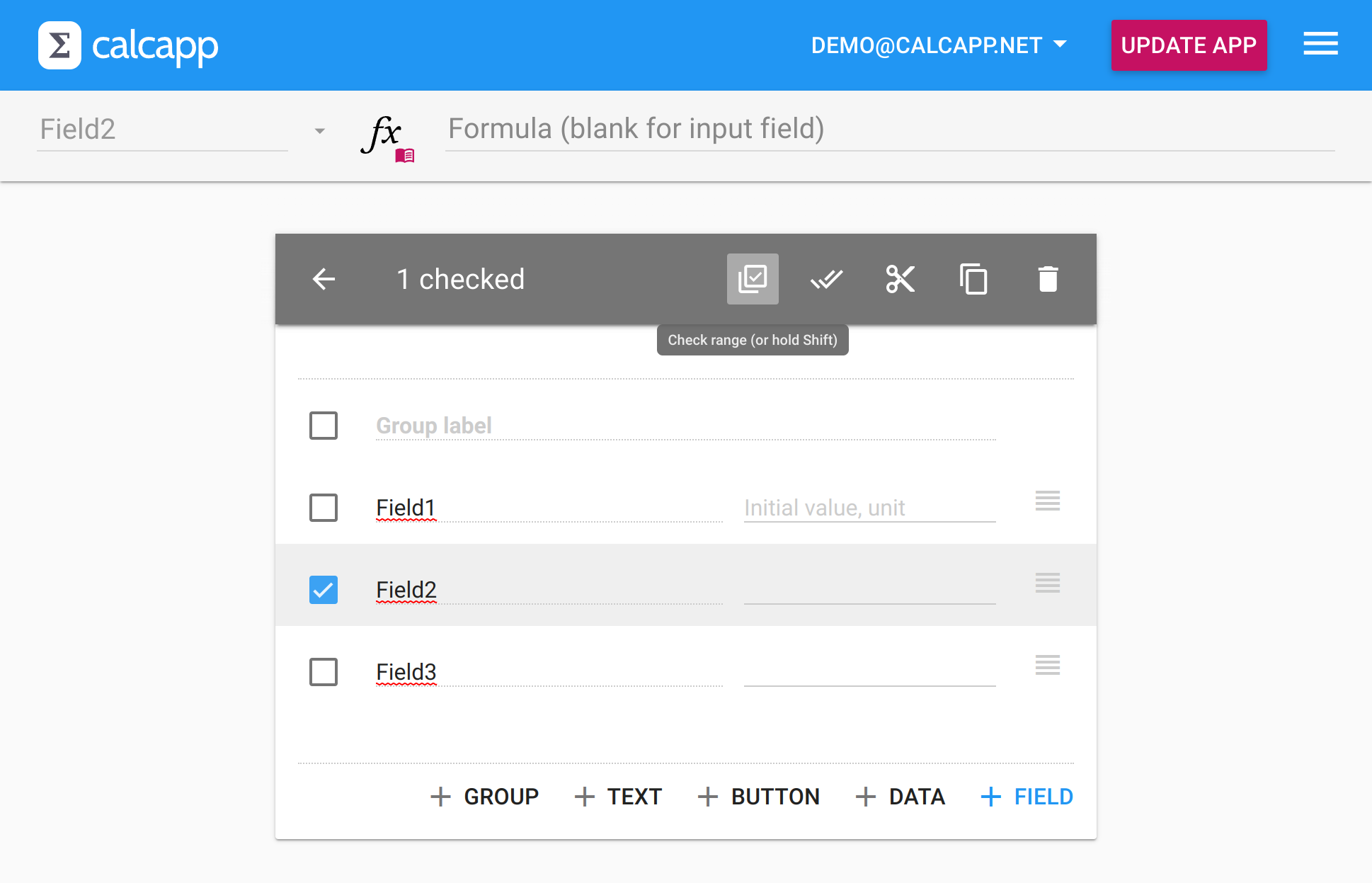 A preview of the new data editor

One of our most-requested features ever is the ability to easily handle tabular data. Our November release last year added support for the powerful XLOOKUP function, but you still had to use a clunky external app to convert your tabular data for use with your apps (and to this day, you still do).

As noted in September, our new data editor will soon make this process go a lot smoother. We have essentially completed it, so here are four screenshots of it to whet your appetite: 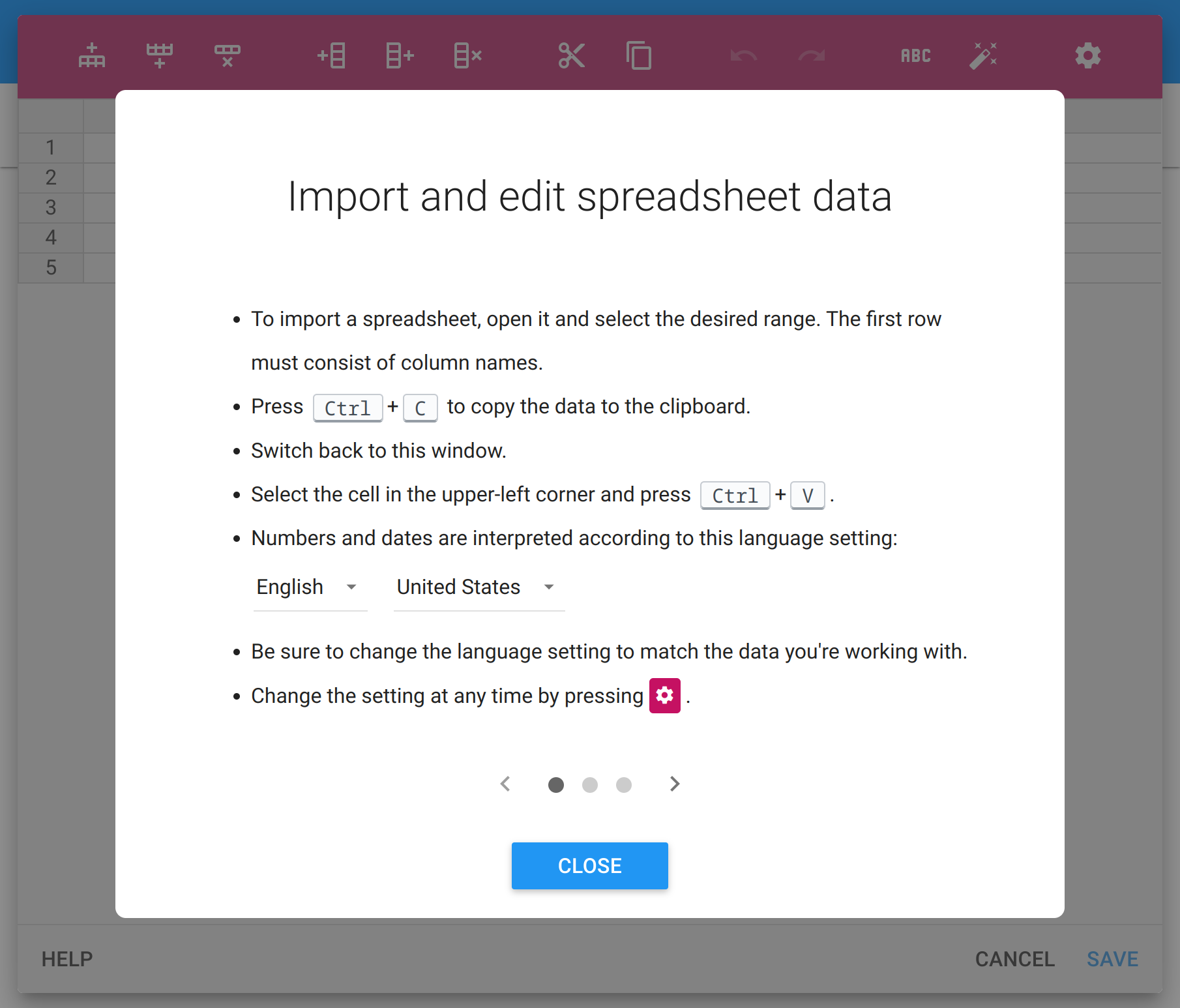 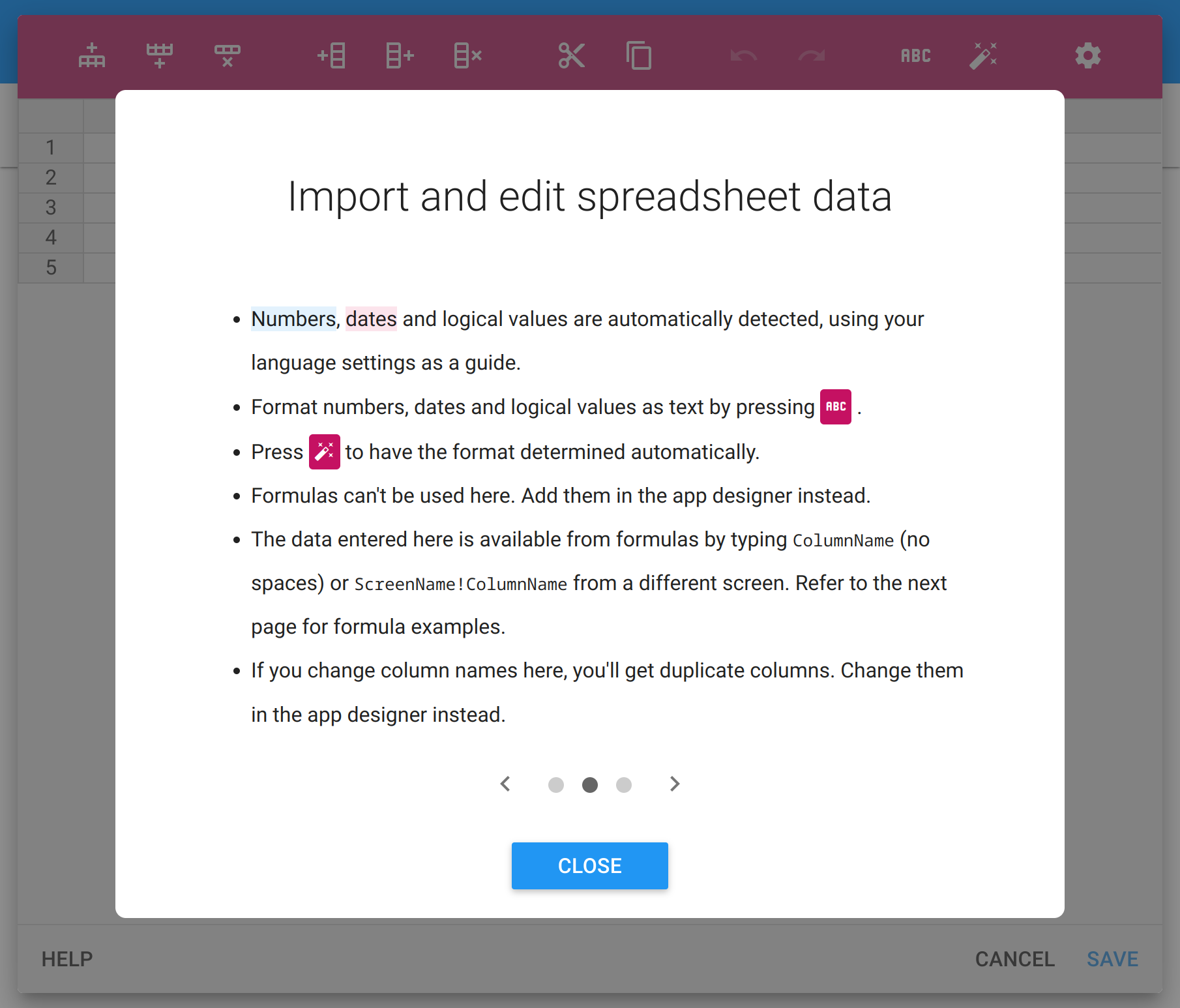 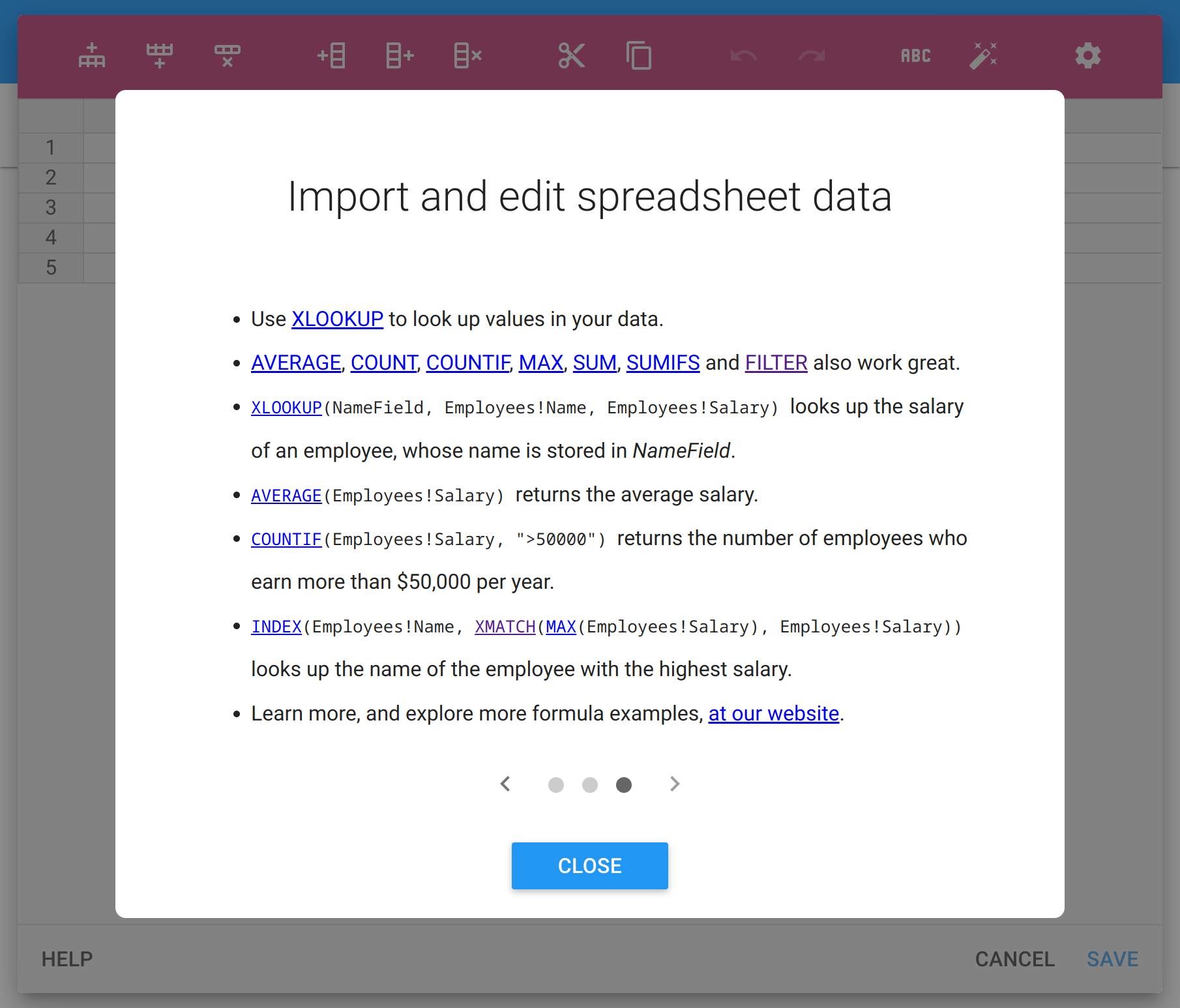 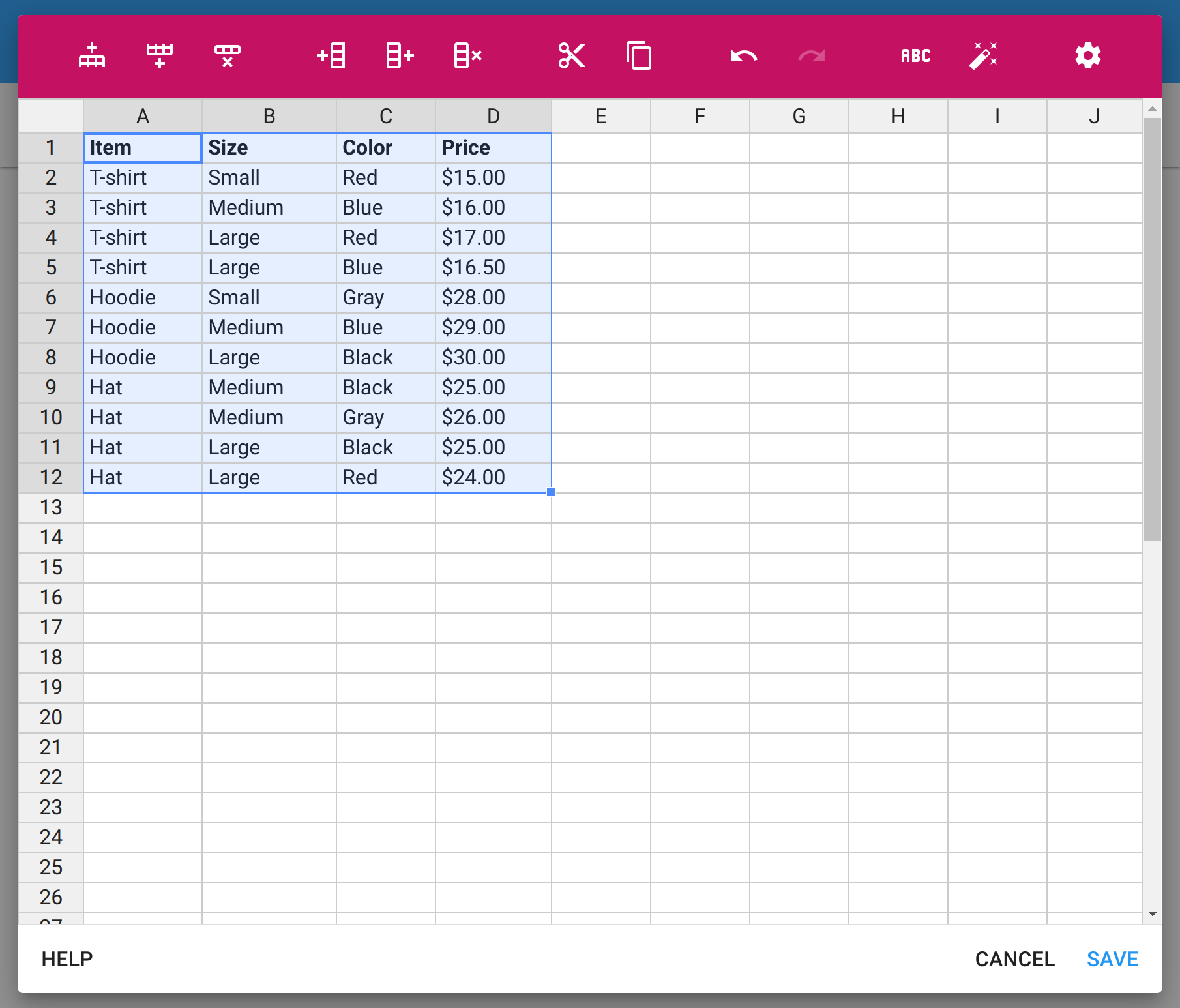 This is shaping up to be our biggest release yet, and we’re working hard to deliver it to you as soon are we’re able.

« Tip: Use iteration with REDUCE