Supporting apps not in English — and a teaser

If your app isn't in English, your users are not getting a great experience today: Numbers may not be formatted correctly and some messages are displayed in English. We're working to improve this situation.

Of all the people who have used apps built with Calcapp this year, around a quarter hail from the United States. We also get lots of visitors from India, the United Kingdom, Malaysia, Germany, the Scandinavian countries and lots of other countries.

In other words, there are countless apps written in a language that is not English and whose users don’t reside in an Anglo-Saxon country. These users have one thing in common: they are not getting an optimal experience when using Calcapp apps.

There are a number of problems felt by these users. For starters, there are text labels in the apps you build that you, as an app desiger, have no influence over and these labels are always displayed in English. Examples include the Back and Next buttons in the navigation bar, error messages and the messages that are displayed when users do things like send reports through e-mail. Having a mixture of languages in the apps you build looks bad and is especially worrisome if some of your users don’t understand English.

Another problem concerns how numbers and dates are displayed. There are countless differences between how numbers are presented in various languages. Apps you build today always use a point (a period) as a decimal separator, but most countries actually use a comma — the United States and Great Britain are two of the few places in the world that use a point. Also, while these two countries use commas to separate groups of thousands, many countries use a period or a space. If you’re used to the Anglo-Saxon way of writing numbers, you read 3,000 as three thousand, but a Dane would interpret 3,000 as the number three.

With a development team in the southern part of Sweden, we’re acutely aware of these problems. Due to time constraints, we hadn’t planned on addressing these issues before ending the beta, but we’re actually devoting some time to these problems right now. The reason is that we have been asked to upgrade an app we built years ago (a drug dosage calculator) to work as a web app — and we’re obviously using Calcapp Creator to do so. The app is in Swedish and it’s important that it works just as well as the old version, which did take all these language issues into account.

Here’s an image of what the new version looks like: 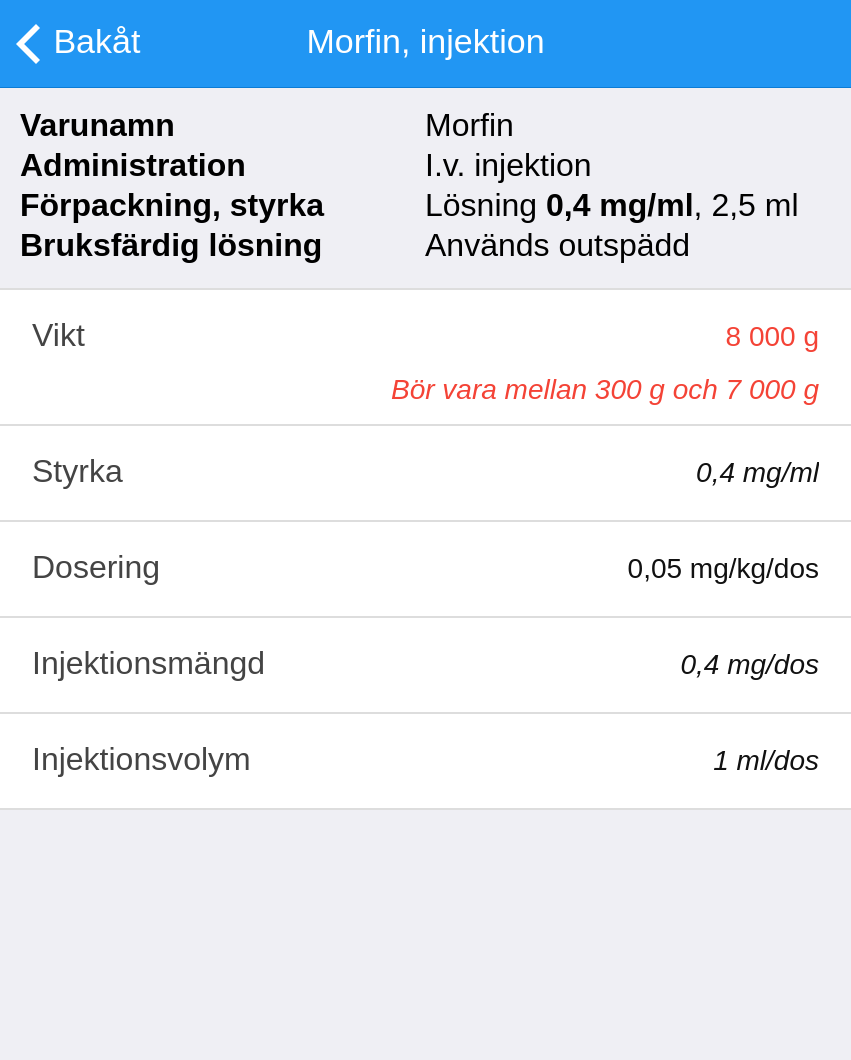 As you can see, numbers are formatted with a decimal comma instead of a decimal point and spaces separate groups of thousands instead of commas. Also, the navigation back button reads Bakåt.

The eagle-eyed reader may notice a few other things that look out of the ordinary. First, there’s formatted text, including text displayed in two columns and text displayed in bold. Second, there’s an error message in red that reads “Should be between 300 g and 7,000 g” (an example of what Excel calls data validation, which can flag suspicious-looking values). Neither of these features are possible with the current Calcapp version.

We are in a privileged position to not have to accept some of the limitations that Calcapp has today. We’re willing to move mountains to achieve the desired result for a client. This has positive implications for Calcapp as a whole, because the features we develop specifically for these clients tend to reach the Calcapp version you can use sooner or later.

We’d love to announce that support for languages other than English, data validation and formatted text will reach Calcapp with the February update, but most of this work will have to wait. We have our plate full trying to deliver cross-references with the February update and it’s probable that we won’t have time to polish any of these other features in time for that release.

Consider this post a teaser, though. There are definitely interesting features coming your way.

« A progress report Feature: A grab bag of improvements »