Formulas written with decimal commas are now fully supported. Set your preference the next time you open Calcapp Creator.

Since we launched the first beta version, Calcapp has only recognized decimal points (“.”) as decimal separators and commas (“,”) as parameter separators in formulas. This is in line with how numbers are written in countries like the US, Britain, Australia, New Zeeland, China, Japan, India and parts of Africa.

However, most parts of South America and Europe (including Russia), as well as parts of Africa, use decimal commas, making Calcapp formulas feel foreign in these countries. We often stress that you can frequently carry over formulas from spreadsheets to Calcapp simply by copying and pasting them, but this has sadly not worked well for our European and South American customers.

Apps produced with Calcapp have supported languages other than US English for three and a half years now. Numbers are formatted according to the language of the app and functions like PARSENUMBER and FORMATNUMBER correctly handle the decimal separator of the configured language. In other words, apps have handled decimal commas correctly for years now, but not the app designer.

Ironically, we’re a Swedish business, and decimal commas are exclusively used as decimal separators here. We’re not only Swedish, though, we’re also software developers. As programming languages exclusively support decimal points, it appears that we have grown a little too comfortable with decimal points to realize that this has been a major pain point our customers have experienced.

This issue is now finally resolved. Decimal commas are fully supported, and you will be asked your preference when you sign into Calcapp Creator: 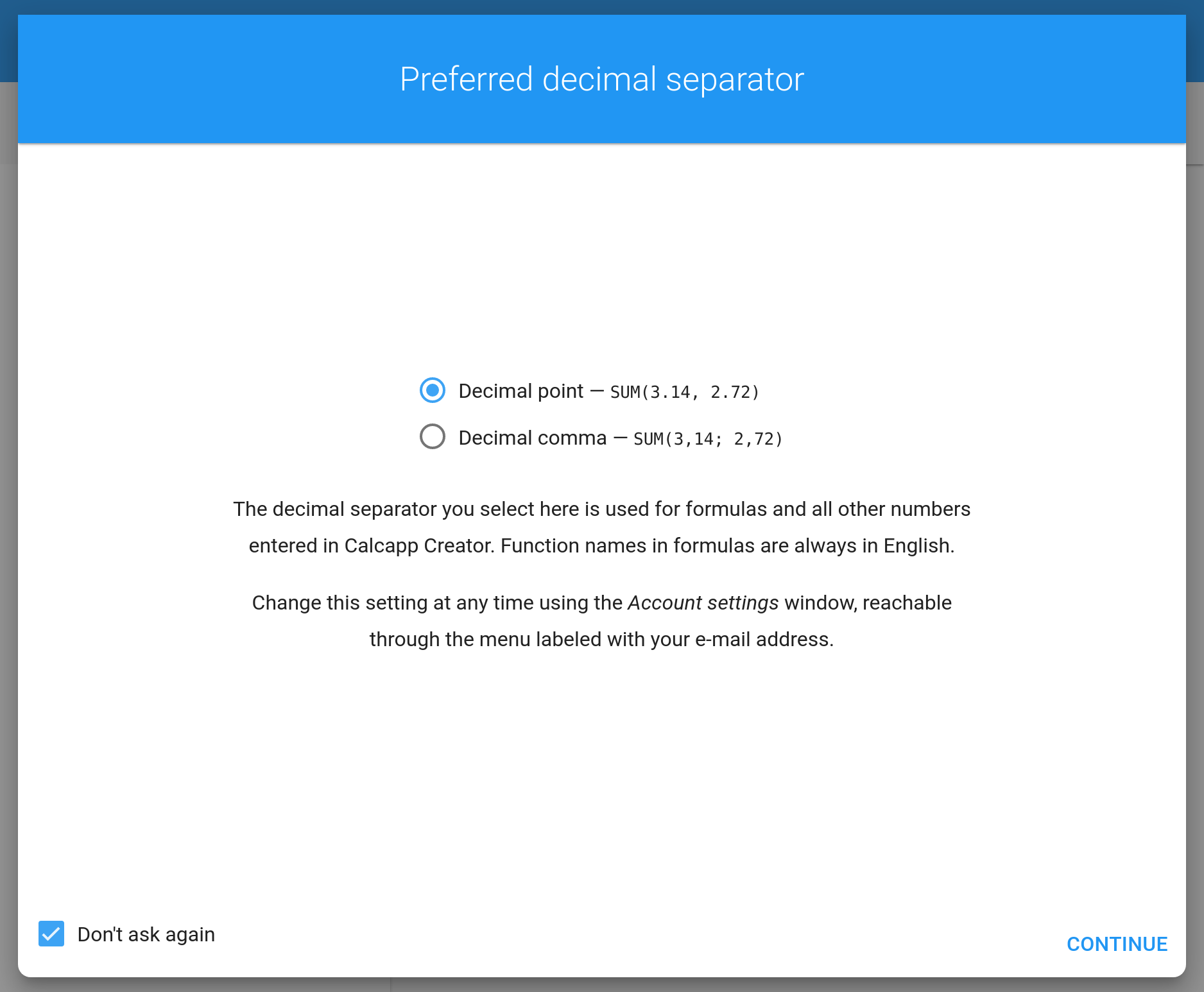 If you set your preference to decimal commas and you open an app you previously authored with decimal points, our server will silently convert all formulas of the app to use decimal commas (and semicolon separators). This process is fast, and it is accurate, so you don’t have to worry about it making a hash of your formulas.

Calcapp Creator will expect you to use decimal commas in other places too, like when you write initial values for number fields and when you author the numbers that are part of a number drop-down field.

This setting does not affect your apps. In order to make them format numbers with decimal commas, ensure that your app is set to use a language that uses a decimal comma as a decimal separator.

« Feature: Dramatically improved documentation for formulas and properties Feature: Decide the next screen with a formula »