Feature: Apps in languages other than US English

Calcapp now supports 79 languages and 147 language variants, enabling numbers, dates and times to be formatted correctly. We have translations for app text provided by Calcapp in 30 languages. Five languages have been translated by human translators and the rest using machine-translation.

Our new release introduces support for 79 languages. Before, Calcapp only supported US English, meaning that all pre-defined labels (such as the Back and Next buttons in the navigation bar) were displayed in English and all numbers, dates and times were formatted according to the customs of the United States.

Different countries and different regions format numbers, dates and times differently. Large parts of the world use a comma as a decimal separator and not a period. Some languages use a comma to separate groups of thousands, others use a space. Date and time formatting varies depending on the region. Notably, the United States represents dates in a way that differs from the rest of the world.

Our statistics indicate that 40 percent of all people running apps built with Calcapp are from the United States. Another 15 percent hail from the United Kingdom and five percent call Australia home. What this shows is that English is a popular language, but it is also indicative of us having done a poor job supporting other languages in the past. We’re hoping that this release (which we started work on a year ago) will lead to the creation of lots of new apps in languages other than English.

To select the language of an app, use the drop-down menu on the new start screen in Calcapp Creator: 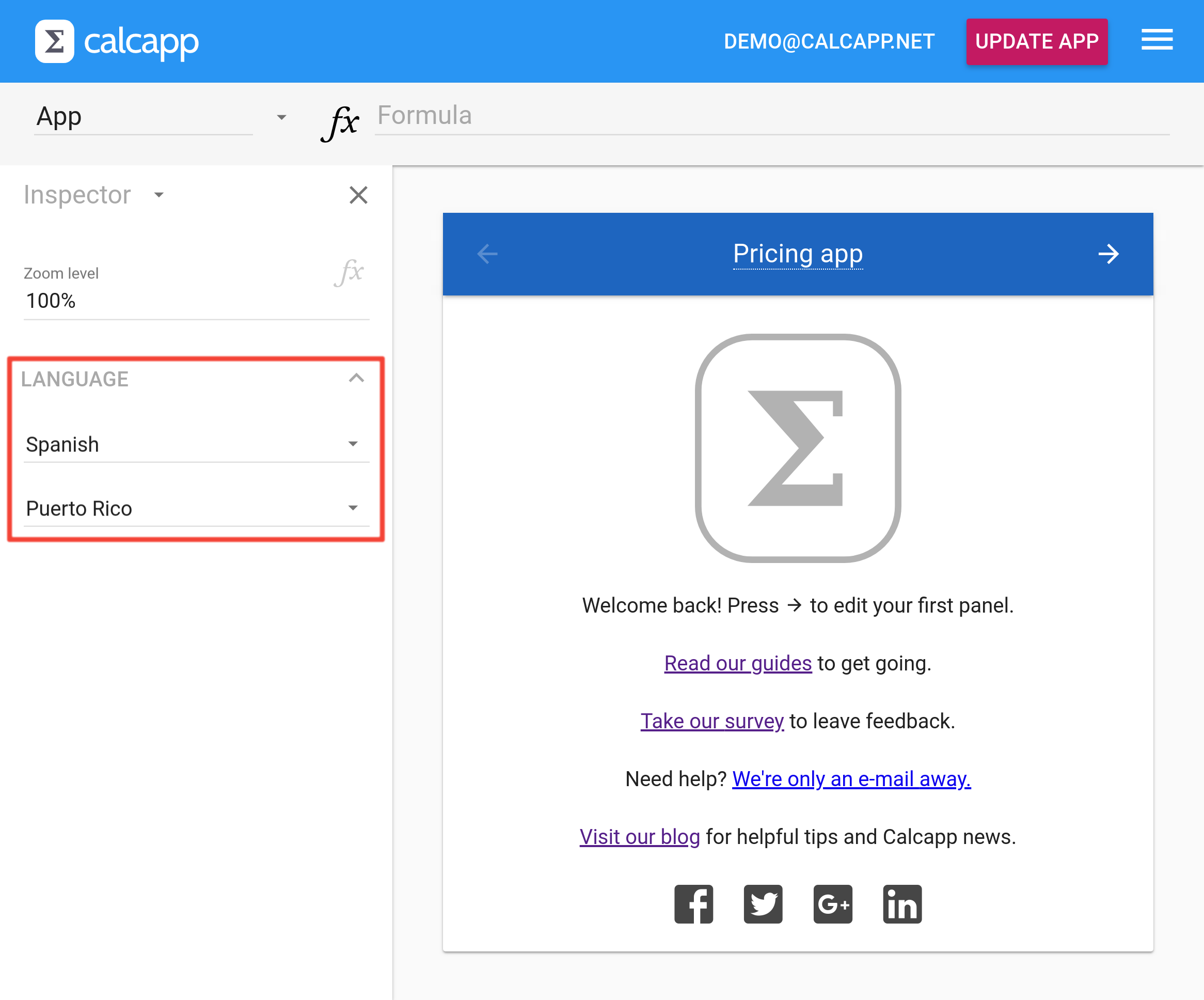 We support number, date and time formatting for all 147 language variants. Supporting a language in Calcapp also means that certain text labels used in apps (again, such as the Back and Next button labels of the navigation bar) need to be translated as well as the labels used by the date and time picker used on desktop computers. (When apps are run on iPhone, iPad and Android, native date and time pickers are used and the text strings used there are provided by the operating system.)

Most of the text strings in apps are provided by you, the app creator. There are some text strings provided by Calcapp, though, and that includes not just the navigation bar button labels but also a large number of error messages most users never see. We have limited resources, so we have only translated the text strings we think users are likely to see. (Other text strings appear in English.)

We only have translations for 30 languages. We have looked at the languages actually used by Calcapp users today when determining which languages to support. If you select a language which we don’t have a translation for, numbers, dates and times will still be displayed correctly, but other labels provided by Calcapp will appear in English.

Finally, we have used human translators only for German, French, Polish, Danish and Swedish and have translated the rest of the text strings from English using machine-translation (Google Translate). We’re aware that there may be some awkward translations (and some that are plain wrong) and we’re counting on you to let us know if you find incorrect translations.

The table below details what languages and language variants we support. A language variant is often a region (such as UK English), but can also denote an alpahet (Serbian uses both the Latin and Cyrillic alphabets, for instance). Calcapp supports formatting numbers, dates and times for all 147 language variants but has translations for just 30 languages. English is used if there is no translation available for a specific language. If a language is not available for the date and time picker used on desktop computers, Calcapp falls back to a related language. (For instance, Swahili falls back to English, but Uzbek falls back to Russian. Arabic as spoken in Algeria has dedicated support, but Arabic as spoken in Egypt uses the regular support for Arabic.)

Trivia: The Swedish translation is special, in that it was created more than a year ago and is a full translation, including all error messages. The reason is that we have a number of enterprise customers in Sweden.

« Feature: Change the size of your app user interface Release: Our March update is now available »