Feature: Use a formula to determine what fields to include in a report

Get full control over your reports. Want to only include fields with values greater than five? Just use FILTER. Also, hidden fields can now be left out of reports.

Three and a half years ago, we had started to lose count of how many times we had been asked one particular question: How can I determine what fields to include in a report?

Calcapp didn’t provide much in the way of customization in that area: you could only include all fields of the screen the button was on or all fields of the app, making for reports with lots of unwanted information. An enterprising user was kind enough to teach us a pretty compelling workaround, which we set out to share in a blog post back in 2018.

The technique described in the post simply asks app authors to put their report buttons on separate screens (configured to only include the fields of that screen), and then add hidden fields. These hidden fields use formulas referencing the fields containing the actual information.

The end result is a single, lone button on a screen. The downside is that you can’t really have any real fields on that screen (they would get included in the report), but the upside is that the button can include an arbitrary set of fields.

With our new release, and a formula engine that supports arrays, that awkward workaround is no longer necessary. Enter the new IncludedFields property of email report buttons and download report buttons, which must be set through a formula.

In order for the formula to be picked up by Calcapp, you must configure your email or download report button to include fields set through a formula. Choose Select fields using formula from the drop-down menu in the inspector when your button is selected, and then on the fx button next to Included fields to edit the formula: 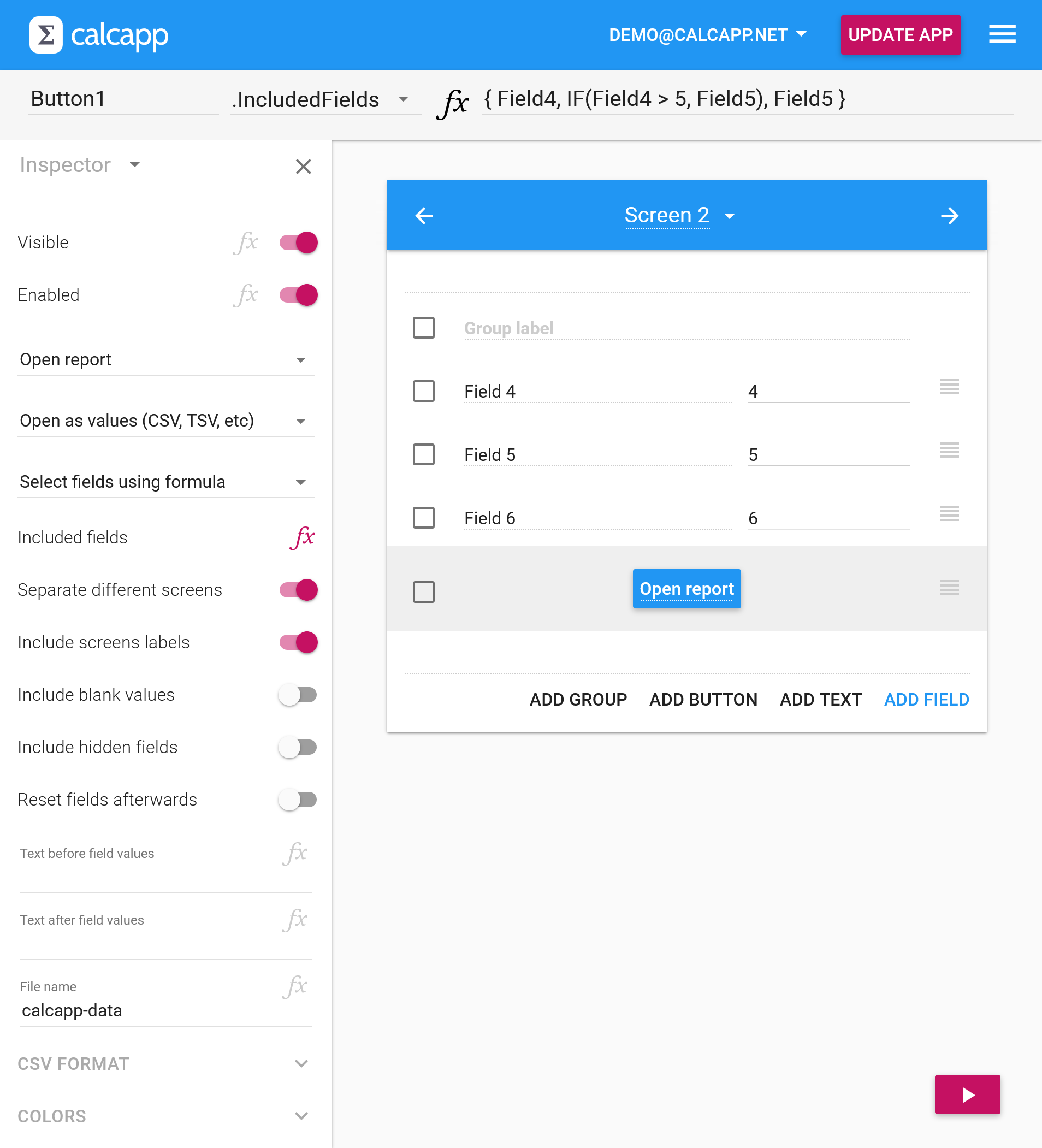 Ranges enable a large number of fields to be referenced in a compact way. This formula includes the fields Field1 and Field5, as well as all fields that appear between them:

For more on how to use the IncludedFields property, including lots of examples, refer to our newly-expanded property documentation for email report buttons and download report buttons.

There are two other new report features that warrant discussion. First, you can now leave out hidden fields from reports simply by toggling the new Include hidden fields option. Previously, hidden fields were always included.

This option affects what fields are included even if a formula is used to determine the set. In other words, if the IncludedFields formula elects to include Field1, it won’t actually be included if it is hidden and the Include hidden fields option is toggled off.

This is the result when fields are separated by screen:

This is the result when fields are not separated by screen:

By not separating fields by screen, you can produce reports that do not mirror the structure of your app. If you determine what fields to include using the IncludedFields property, the report will reflect exactly the fields you include in the array, in the exact order they are specified there.

You can also customize the CSV files sent through your apps and add text before and after field values using formulas.

« Feature: Decide the next screen with a formula Feature: Send formula-driven emails »