Microsoft Flow enables you to glue your apps together with thousands of services, like Excel or Slack, in the same vein as Zapier. It needs a so-called JSON schema to work, though, which are tedious to write. Calcapp Creator can now generate them for you.

Less than a year ago, we received a support e-mail from a user whose app posted updates to the company-internal Slack channel. We were puzzled and intrigued by her app, which was evidently created with Calcapp, and yet performed a feat we would never have attributed to Calcapp, that of posting to a Slack channel.

“Oh, I just used Zapier,” she wrote. We had to sheepishly admit to never having heard of this service, which was evidently used to power our apps to do heretofore unimaginable things. Zapier turned out to be the glue layer connecting platforms like Calcapp to thousands of services like Google Sheets and Slack. With Zapier, we soon learned, Calcapp could be taught to do everything from creating a new sales lead in Salesforce, adding a new Trello card, sending SMS text messages through Twilio to — yes — posting to Slack channels.

Our intrepid user had simply used our existing “send to server” functionality. When adding support for sending e-mailed reports, we had also added the ability to send data to arbitrary servers. Truth be told, this was done not because of customer feedback, but because it seemed useful and because it was very easy to do. (When you’re sending a report, you’re sending data to our server, which generates the report and sends it on its way. The “send to server” feature essentially just allows you to specify a different server.)

As the blog post from 2016 makes abundantly clear, we had no idea that this feature could be used to easily glue together apps with thousands of services. We thought it was an advanced feature enterprises might possibly want to use to connect apps to their internal systems.

Zapier, it turned out, could digest the information sent from an app, opening up limitless possibilities. We capitalized on this and created a video tutorial, showing our users the ropes, only days after first learning to use the feature ourselves. Now, using Zapier with Calcapp has become popular and we see lots of apps integrating with popular third-party services.

Of course, Zapier isn’t the only glue-layer service there is. Just this month, we added support for Zoho Flow, a competitor. (Sadly, the popular service IFTTT cannot be used with Calcapp, as it isn’t flexible enough to be taught to digest the data sent by your apps. If there’s demand, we could fix this. Let us know if this is important to you.)

Microsoft also has an offering in this space, named Microsoft Flow. Unlike Zapier and Zoho Flow, it needs a little extra help to understand the data sent by your apps. Microsoft Flow expects you to feed it something called a JSON schema before it’s prepared to get to work for you.

A JSON schema is essentially a text file which describes the data sent by your apps. Let’s say that your button sending data is configured to only send the data of the panel it is on and that you have one text field, a switch field and a number drop-down field. The JSON schema Microsoft Flow expects should tell it about these three fields, the labels you use and the fact that the text field value is a text string, that the switch field value is a logical value (TRUE or FALSE) and that the number drop-down field value is a number.

A JSON schema uses a format only a programmer could love, though, and writing and maintaining these schemas isn’t for the faint of heart. Also, whenever you make changes to your app, the schema needs to be updated. If you add a field, remove a field, change a label or, say, make the number drop-down field a text drop-down field, Microsoft Flow expects a new schema.

That’s a lot of work, so we set about automating it for you. Calcapp Creator can now generate a JSON schema automatically, enabling you to simply copy it to the clipboard and paste it into Microsoft Flow.

When your button is selected, the inspector shows a new button:

Press Show schema and you’re presented with the generated schema: 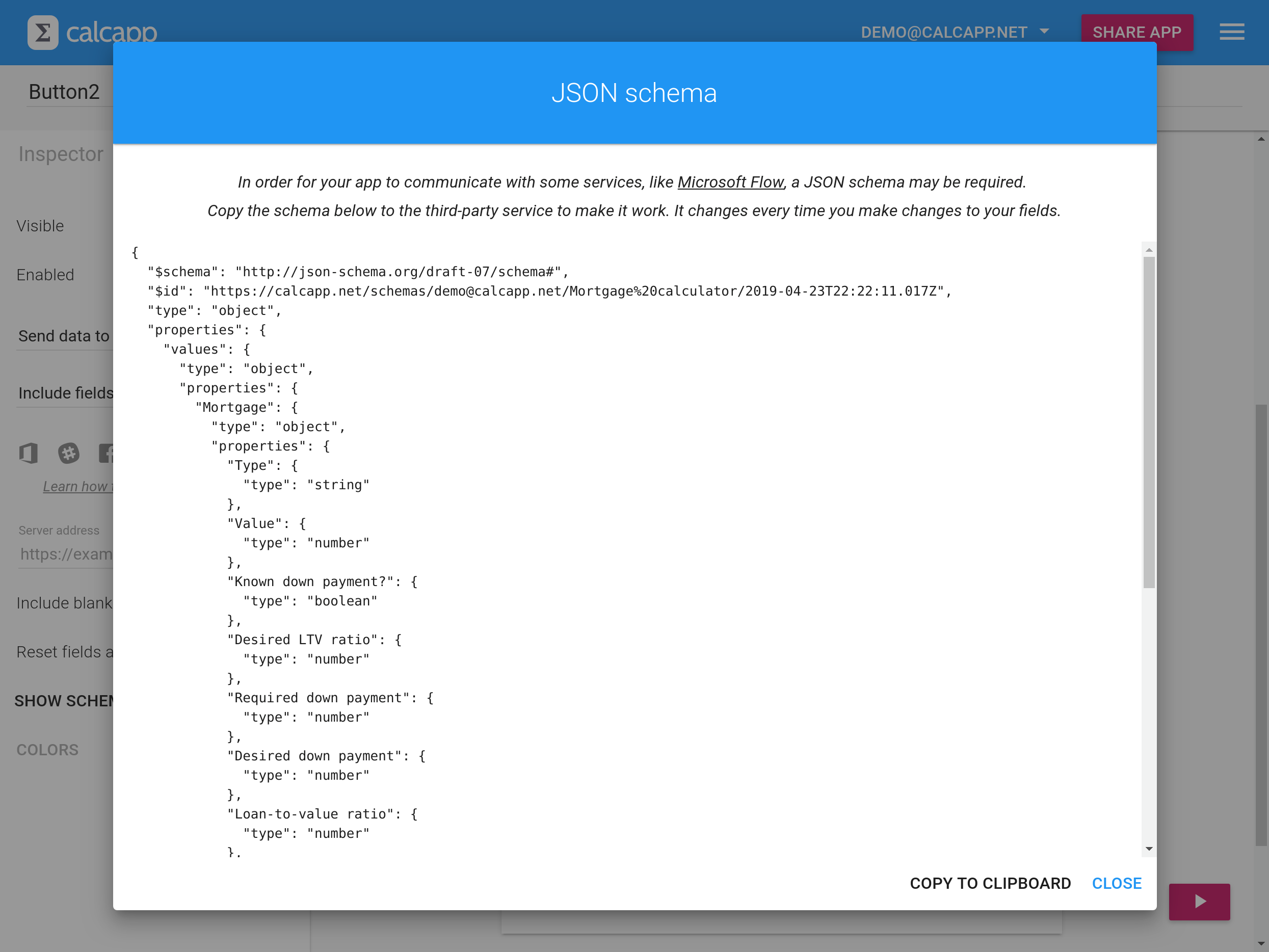 We may do a video tutorial in the future showing you how to integrate with Microsoft Flow, but for now, here are a few pointers:

First off, you’ll need a Request connector in order to receive data from your app built with Calcapp: This is where you need to paste your JSON schema, generated through Calcapp Creator: 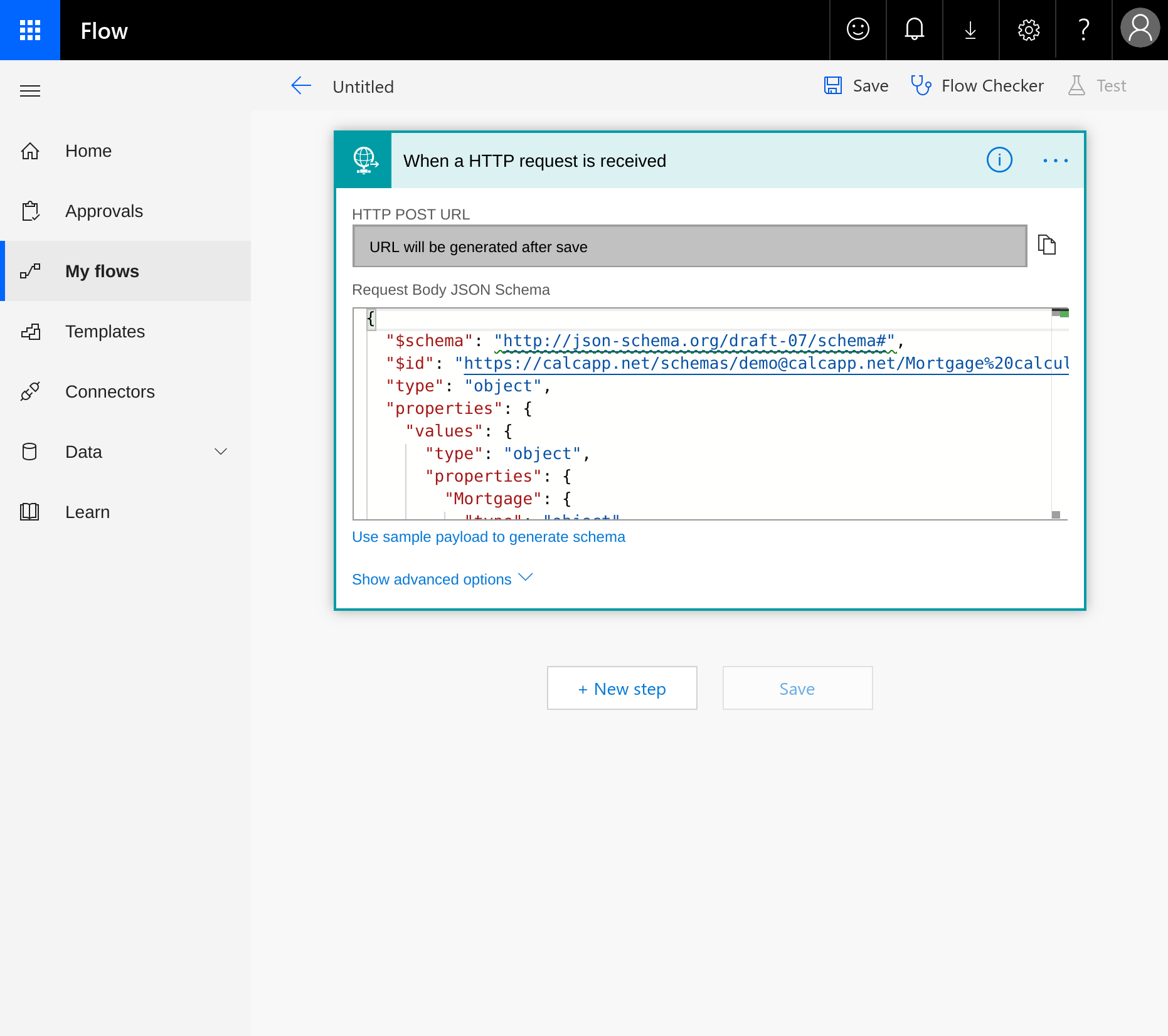 Press + New step to connect your app with your favorite service. You’ll then need the HTTP POST URL generated by Microsoft Flow and paste it into the Server address field for your button in Calcapp Creator.

« Taking stock and looking ahead Build your startup on Calcapp »